This conical sundail was crafted by an Alexandrian technician and dedicated to King Ptolemy II (or perhaps to Ptolemy III in the early years of his reign), by a donor who probably was an important citizen of Herakleia. It tesifies to the export of technological know-how from Alexandria to the provinces of the Ptolemaic empire and was probably used to schedule public activities (religious or administrative) in an institutional or religious building, or perhaps in a gymnasium.

Images
Photo 1: Photo of the main quadrant with the underlying dedication, from Wörrle 1988, p. 475, Pl. 5
Photo 2: General view of the artefact, from the website of the Musée du Louvre

The text is written underneath the main quadrant in two lines respecting word ending.
Letters clearly cut, although with a somewhat irregular ductus. Regular letter size except for the round characters O and Θ, which are slightly smaller. Letter form of the second fourth of the 3rd century, with thickening at the end of long hastae and no apices. Σ with clearly diverging horizontal bars; Θ with central point; Π with slightly shorter second hasta; the horizontal bar of A is rendered with a slightly bowed line.

Original Place: Herakleia near Latmos
Date: Probably between 270 and 240 BC
Justification: Lettering and historical context.
Provenance: Found in a "enceinte carrée à dégrés" which the discoverer interpreted as the bouleuterion of Herakleia (G. and O. Rayet via Haussoullier 1899, p. 275).

Further bibliography: see Gibbs 1976 for a study of Greek and Roman sundials (esp. p. 30-39 for conical sundial; the present specimen is not recorded); Fraser 1972, I p. 412-413 on the link between the scientific patronage of the Ptolemies and the dedication of technological artefacts to members of the royal house. On Herakleia under Ptolemaic control (from Ptolemy II to Ptolemy III, then again between the reigns of Ptolemy IV and Ptolemy V), see Huß 1976, 201; J. and L. Robert 1983, p. 118-132; Meadows 2008; cf. PHRC019 for Herakleia temporarily under Attalid influence during the reign of Attalos I.

(S. Caneva)
To King Ptolemy, (dedicated by) Apollonios, son of Apollodotos. Made by Themistagoras, son of Meniskos, from Alexandria.

This conical sundial, one of the earliest of such kind known from the Greek archaeological evidence (Diels 1920, p. 176-178) was dedicated to a king Ptolemy in a period when Herakleia was under Ptolemaic domination. The letter shape makes the reign of Ptolemy II (probably after the death of Arsinoe II in 270) or the early years of Ptolemy III a plausible date. Neither the donor nor the creator of this device are otherwise known, but while the name of the artist is followed by his ethnic Alexandreus, the absence of this element in the name of the donor may suggest that he was a citizen of Herakleia.

The object was created in Alexandria, or at least by an Alexandrian technician in Ptolemaic Karia, but the sundial was designed to work at the latitude of Herakleia. This dedication therefore attests to the export of technological objects and know-how from the Ptolemaic capital to the provinces of the kingdom. At the period of the dedication, the Alexandrian court possessed the technological knowledge to produce and export such devices. Fraser 1972, I p. 412-413 has rightfully drawn attention to the habit of courtiers to dedicate technologically advanced objects to members of the royal house as a mark of social distinction: cf. the epigram by Hedylos of Samos 4 Gow – Page (Ath. 11.497d-e) with the dedication to Arsinoe Philaldephos of a rhyton in the shape of a whistling Bes by the engineer Ktesibios.

Besides the donor’s pride to offer a technological artefact to the king and for the use of the local community, the dedication of a chronometric device to a sovereign possibly has a link with the claimed prerogative of Hellenistic rulers as ‘masters of time’. Their names were often used to rename to months in the local calendars, their regnal years were referred to in the date of documents across the kingdom and the advent of a dynasty could be reckoned as the start of a new era (Savalli-Lestrade 2010). Sundials were used to schedule public activities, both profane and sacred, in a variety of types of settings ranging from institutional buildings to sanctuaries and gymnasia (see e.g. Veuve 1982, p. 24-25). Whether this specimen was used to plan ritual or rather administrative activities, is a question that has to remain without an answer. In this respect, the inference one might draw from the first editors that the sundial was used in the bouleuterion of Herakleia remains highly hypothetical on the ground of our poor knowledge of the Hellenistic topography of Herakleiathe city. Moreover, many reasons could exist to reuse a precious and practical object like this in a context other than that for which it had originally been dedicated. 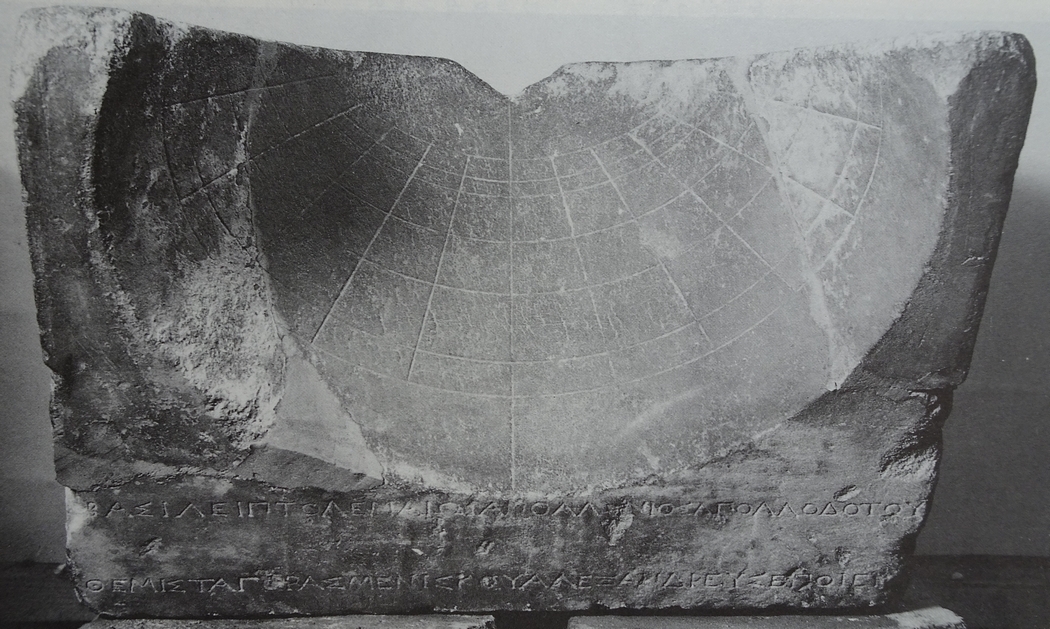