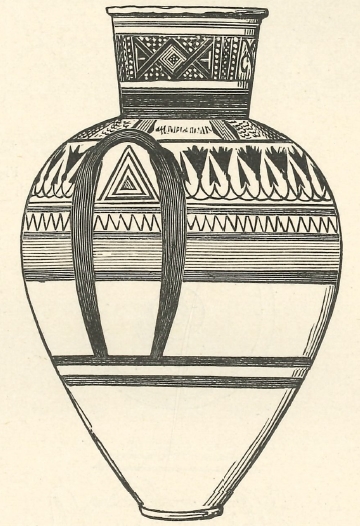 This amphora is the sole vase inscribed with a dedication for Arsinoe Philadelphos apart from the Alexandrian oinochoai of Ptolemaic ruler cult. The difficulty in interpreting this object stems from the fact that because of its decoration, the amphora closely resembles funerary amphoras from Eastern Cyprus of the period Cypro-Archaic I (700-600 BC). If we exclude the possibility of a modern fake, the only possible interpretations are that an amphora of the archaic period was found and reused in the early Hellenistic period, or that an archaic type of decoration inspired the producer of the vase at the time of the diffusion of Arsinoe's cult. Be that as it may, this large amphora might have been used to stock edible goods for ritual offerings to the deified queen. Its size and rich decoration could suggest that the vase was part of the cultic tools of a priest or of an association rather than belonging to a domestic sphere.

Photo 1: Drawing of the amphora, from Palma di Cesnola

The inscription was carved, probably in one line, on a part of the amphora's shoulder thas had been left free from painted decoration.
No information available about writing.

Original Place: Salamis
Date: Between 270 and 240 BC
Justification: historical context (cf. commentary to PHRC005).
Provenance: Purchased in the area of Salamis; no precise information provided.

Since this type of amphoras is not known after the end of the Cypriot Archaic period, it is difficult to explain why a vase of this type would have been dedicated to Arsinoe II in the 3rd cent. BC. A first hypothesis to explore is that, possibly like a dedication to Kleopatra VII from Salamis belonging to the collection of A. Palma di Cesnola (PHRC046), this inscription could be a modern fake added to an archaic amphora found in a necropolis and sold to the Cesnola brothers. However, at the time of the Cesnola excavations at Salamis in 1874 the dossier of short dedications to Arsinoe Philadelphos was still a relatively small and obscure one (cf. Perdrizet 1894, p. 358 with a list of 6 already published specimens; among these, only those published in CIG and in LBW could already be known in 1874). Accordingly, there is little chance that such an inscription would be added to a vase to increase its appeal on the market, even more so considering that the size and refined decoration of our amphora already made it an attractive piece of art for a collector. An alternative hypothesis is that the amphora was an archaic one reused and dedicated to Arsinoe in the early Hellenistic period, or, as already proposed by A. Palma di Cesnola 1891, p. 258-259 (Italian edition of the ‘Salaminia’ volume of 1884), an Hellenistic production following an archaic decorative model. If this was the case, this amphora would confirm a well-known Cypriot tendency to receive external influences and to reshape them in compliance with local traditions.

While the historicity of these interpretations remains impossible to assess, it is worth exploring the possible use of this amphora in relation to the cult of Arsinoe Philadelphos. To begin with, it seems improbable that this vase was dedicated to the deified queen with the specific purpose of becoming part of a tomb’s goods. Ptolemaic oinochoai of ruler cults have often been found in funerary contexts, but they were primarily conceived to be used during rituals for the Ptolemies and only later became part of the funerary goods of the subjects, a detail revealing the prestige of ruler cults in the 3rd cent. BC (cf. commentary to PHRC012). A more appealing hypothesis is that this large vase was originally employed to store edible goods used for the cult of Arsinoe. Neither the social type of agents involved (priests, a cultic association, etc.) nor the process of collecting such goods for a ritual purpose can be better identified. However, the dimension and rich decoration of the object suggest that it probably did not belong to a domestic cult.