The text, elegantly written on a stele of local limestone erected in the sanctuary of Athena Polias, is a decree of the city of Itanos establishing cultic honours for king Ptolemy III and queen Berenike II. The absence of the epiclesis Euergetes suggests a date before 243/2 BC. The king is praised for his euergetic and protective attitude toward the city, in continuity with his ancestors' policy. The cultic honours decreed by Itanos comprise the dedication of a sacred precinct of the royal couple in a park near a city gate and the celebration of a festival for the king's birthday.

Images:
Photo 1: Photo of the stone; Herakleion Museum, Inv. No. 65, copyrighted image. Courtesy of the Greek Ministry of Culture and Sports, Department of Antiquities
Photo 2: view of the Basilica A, where the stone was found (S. Caneva, CC-BY-SA 4.0 International)

Object Type: Stele
Small rectangular stele with a moulded top, broken on both sides; lower part missing, but the inscription is entire with the exception of the beginning of the last line. The rough back surface shows that the stone was meant to stand against an architectural structure.
Material: Limestone
Dimensions:
Height (total): 41; (decoration): 5 cm
Width (top): 32; (bottom): 34 cm
Depth (top): 7.5; (bottom): 8 cm

The text is elegantly written in the upper part of the stele; word and line ending coincide.
Beautiful letters of the mid-third century, with regular size and thickening at the end of long hastae. The punctuation mark : is used at line 13 to separate the city's resolution from the conclusion of the text.
Letter height between 0.6 and 0.7.

Original Place: Itanos, Sanctuary of Athena Polias
Date: Between 246 and 243 BC
Justification: tituraly and content
Provenance: The stele was reused in a wall of the Byzantine Basilica A at Erimoupolis, ancient Itanos.

With good luck. Since King Ptolemy, having received the city of Itanos and his citizens from his father, King Ptolemy, and his ancestors, continues to benefit (the citizens) in a good and glorious way, and to preserve with good will their right to use the same laws they had when he took them over, it was decreed by the council and the assembly: to establish the garden at the gate as a sacred precinct of King Ptolemy and Queen Berenike, the sister and wife of King Ptolemy; the city shall sacrifice each year to King Ptolemy and Queen Berenike on their birthdays (?) and celebrate a foot race.
The kosmeteres in charge with Soterios shall inscribe this decree on a stone stele and erect it in the sanctuary of Athena Polias. The costs shall be covered with the city revenues.

The absence of the epiclesis Euergetes suggests that the decree was issued in the period immediately after the accession of Ptolemy III, i.e. between 246/5 and 244/3 BC.

According to Habicht 2017, p. 89, 175-176, this text would mark a change in the dynamics of religious interaction between Greek poleis and rulers, as the Itanians do not provide any precise motivation for the ritual honours decreed to Ptolemy III, the new king simply being thanked for his continuity with the policy of his predecessors. However, given the political background of the Ptolemaic presence at Itanos, the city’s gratitude for the peace-keeping role played by the king can hardly be seen as an insufficient reason for the grant of local cultic honours (Caneva 2018, p. 112). A Ptolemaic protectorate on Itanos was already established by the admiral Patroklos at the dawn of the Chremonidean War ( IC III, iv 3, a honorific decree for Patroklos; cf. Paschidis 2008, p. 459-461). At that time, Ptolemy II seized the occasion of acting as a peace-keeper in the internal struggles affecting the city to strengthen his presence on the island and ensure to Ptolemaic interests a strategic basis amid the route between Egypt and continental Greece (cf. IC III, iv 8, a contemporary political oath from Itanos; cf. Chaniotis 1996, p. 14, n. 41). Thus Patroklos’ initiative must be read against the same strategic background as the roughly contemporary foundation or renaming of two Cretan cities as Arsinoe, respectively in the central and western part of the northern coast of the island (Chaniotis 1996, p. 31, n. 140; Müller 2006, p. 201, no. 9-10, a city near Lyttos and Rhithymna).

On the grounds of lines 2-4, one might conjecture that Itanos entered the Ptolemaic area of influence as early as the reign of Ptolemy I, yet a documentary proof of this early date is missing. In any case, there is no evidence that Itanos hosted a Ptolemaic garrison before the time of Ptolemy IV (PHRC015; cf. also IC III, iii 9, lines 40-44, for the reign of Ptolemy VI; Chaniotis 1996, p. 307-310, no. 49). Our decree is therefore rather to be interpreted in relation to the effort of the new king to confirm his political influence on the island at a diplomatic level, a point also testified by a contemporaneous dedication by the city of Phalasarna to the Theoi Megaloi, in the name of the royal couple ( IC II xix 2), and by the fragment of a statue base of the Ptolemy III found in Eleftherna ( IC II xii 25). References to dynastic continuity across the three generations of Ptolemaic rulers are particularly common in the evidence of the first years of Ptolemy III, both at the diplomatic and religious level, and are consistent with the attempt of the new king at stressing his legitimacy and confirming past diplomatic relationships in a period troubled by the Laodikean War (Caneva 2016a, p. 180-188).

The formula ἱαρὸν τέμενος is redundant and rarely attested, unless we interpret ἱαρὸν as a noun (sanctuary) rather than an adjective. However, this interpretation is syntactically difficult and could be accepted only by assuming that the carver omitted the conjunction καί. The use of ἱδρύω with a double accusative is also unusual. The unclear syntax of this passage has led Viviers 2011, p. 45 to conclude that the portion of land on which the park stood was a royal property, which can be explained by interpreting the passage at lines 8-9 as “in front of the gate of (= belonging to) king Ptolemy and queen Berenike” (but note that following this reading, the property would concern the gate, not the park). According to Viviers, the newly established cults for the king and queen would be part of a process of negotiation by which the city obtained that this portion of land would return under civic control. This can hardly be the case, since the hypothesis of a royal property concerning the city gate is unparalleled and difficult to explain. It seems more plausible that the genitive “of king Ptolemy and queen Berenike” refers to the newly established temenos; as suggested by Austin 2006, p. 462-463, no. 265, the city of Itanos reused a park located on public land as a sacred precinct but was “unable or unwilling to pay for the construction of a temple”.

According to Guarducci (in IC III, iv, 4, p. 85), the city gate mentioned in the text could be located either at the western edges of the city, i.e. on the road directed towards the inland, or on its southern side, connecting the older city with the southern harbour. This area probably hosted the Ptolemaic harbour and later the garrison, as suggested by the location of the Ptolemaic fortress on the southern hill. The first archaeological surveys suggest that the area including the modern southern beach of Itanos and the southern hill was significantly reshaped by the Ptolemaic presence (see Viviers 2011 with previous references) and this connotation makes it plausible that the park dedicated to the cult of the royal couple was indeed located near the southern gate.

The choice of a park on the public land near the city gate provides an interesting case in which a liminal space of passage was used to symbolically articulate the relationships between the city and the external power that ensured the peace of the community, while also exerting control on its life. The expression πρὸς τᾶι πύλαι does not in itself allow to conclude whether the grove was located inside or outside the city. In the first case, the new precinct would have symbolically integrated the Ptolemaic presence within the space of the old polis. The decision to use the temple of Athena Polias, probably located on the terrace of the western acropolis, to post the stele commemorating this civic decree, certainly stresses the link between the royal family and the city. However, waiting for extensive excavations on the site, it is not possible to conclude whether the park was located inside the city, in which case it could occupy the area between the basilica A (where the stone was reused) and the southern beach (the probable location of the Ptolemaic harbour), or just outside the walls, in the area now covered by a palm grove between the old city (to the north), the beach (to the east) and the basilica B (to the south), perhaps the seat of the ancient Asklepieion (Viviers 2011, p. 57, n. 83).

Since the expression γενέθλια is always used in the plural in the sense of “birthday”, the formula concerning the establishment of an annual sacrifice does not allow us to understand if the ritual had to be celebrated only once, for the birthday feast of the king (on 5 Dios: OGIS 56, line 5), or twice, including also the birthday of the queen. Similarly, no indication is provided about where the sacrifice to the royal couple should take place. The lack of references to a proper temple or to other major architectural features suggests that the city of Itanos simply intervened to delimit the park as a sacred precinct. This initiative turned the park into an open-air sacred area, where an annual foot race took place, probably involving the members of the civic gymnasium. In any case, the mention of a sacrifice implies that the temenos hosted an altar, since decrees normally include specific dispositions when the new ritual for the honoured sovereigns is to be performed on the existing altar of another deity of the city.

Once we exclude that Ptolemy granted a piece of land of his own property to the city of Itanos to set up the new precinct, the initiative appears to rely entirely on the city itself. The city council and assembly voted the decree and the city revenues were used to pay the costs. The responsibility for the erection of the stele was ascribed to the synarchy of the kosmeteres, traditionally mentioned as an anonymous group together with the personal name of the chief kosmeter (cf. IC III, iv 3, lines 22-23, concerning the stele with the decree for Patroklos). 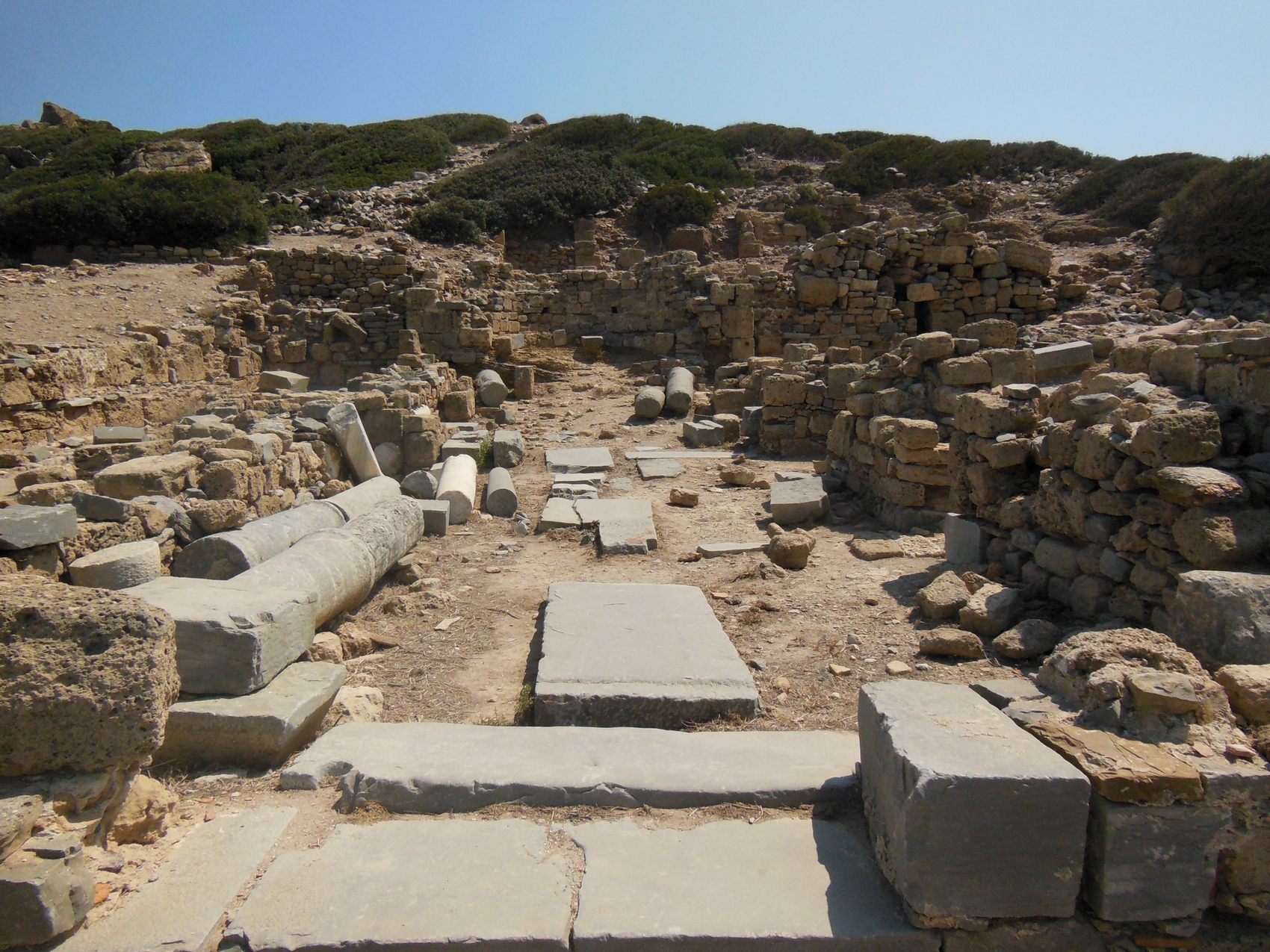